Since early 2000s biofuels in transport have been supported by policy. For two reasons. One is the contribution they make to carbon reduction and the other for their capacity to reducing the fossil oil dependency of the transport sector. Biofuels are blended in transport fuel. First, the Biofuels Directive (2003/30/EC) targeted a 5.75% share by 2010. Then, the Renewable Energy Directive (RED – 2009/28/EC) set a target for 2020: 10% of energy in road transport should be of renewable origin. The RED also introduced sustainability requirements with minimum GHG-savings. In 2015 the RED was amended to incorporate issues on ILUC (Indirect Land Use Change) and capping the contribution of crop-based biofuels to 7%, shifting the focus to advanced biofuels (Directive 2015/1513/EU).

The proposal for RED II extends its focus to advanced biofuels and renewable fuels (renewable electricity directly or converted to liquid or gaseous fuels) and sees them grow to 6,8%. And it will be this 6,8% share that economic operators will be obligated to fulfill. 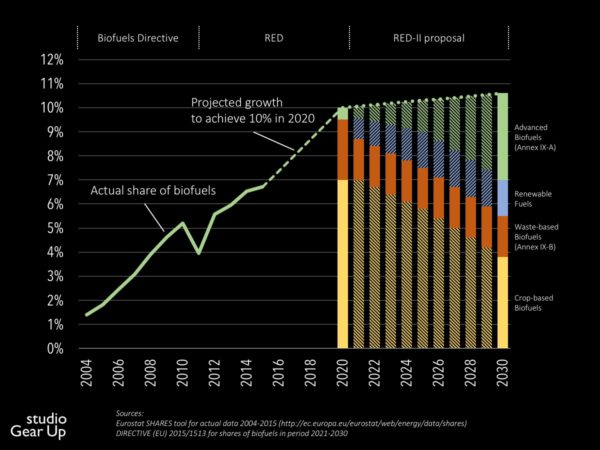 The development of the share of renewable energy in the transport sector (see Figure) show a surprising picture. In 2030 the share of renewable energy in transport will be expected to be 10,4% as compared to 10% in 2020! This illustrates a complete lack of ambition. It is quite easy to guess that this will not lead to any further carbon savings nor that oil dependency will see any significant reduction.

The European Commission (EC) may argue that in RED-II the share relates to all European transport, while the RED targeted only road transport, but it remains clear that this is not a disruptive change, at best one could call it a low evolutionary step. The conclusion must be that advanced biofuels and renewable fuels replace crop based biofuels, while they should replace fossil oil.

Moreover, the new RED-2 proposal demonstrates the success of the sustainability requirements set for biofuels in the transport sector. In the new proposal this approach is extended to the use of bioenergy for electricity and heat generation and it sets higher thresholds for biofuels (minimum GHG saving increases to 60%). It comes therefore as a surprise that the Commission has chosen to reduce the share of crop based biofuels to max 3.8% by 2030. After all, the sustainability criteria have established a safeguard.

It is difficult to understand why the Commission slows down its pace for the introduction of renewables in transport. The EC White Paper ‘Roadmap to a low carbon economy’ (COM/2011/112) sets challenging targets for all economic sectors to curb carbon emissions in EU in 2050 to max 5-15% of 1990-levels. The Paris Agreement has further underlined the urgency to speed up policy actions to limit climate change to max. 2 C, and preferably stay below 1.5 C. In that light there is a need to be much more ambitious. I would call for a much more disruptive approach. We should no longer focus on increasing the share of renewables in small steps. From now on it is dead end for fossil. By 2030 we will limit the share of fossil-based energy in transport to max 70-75% and will further hugely reduce it in the following period. This will spur innovation, also in transforming the petrochemical based industry clusters to a biobased and circular mode of operation. It will boost efforts in mobility efficiency improvement and pave the way to use low energy-intense mobility options. The advanced biofuels European industry claimed in a 2017 report (Sub Group Advanced Biofuels) that they are able to deliver more advanced biofuels to the European market than the EC set in the targets. Other renewable based options – like Full Electric Vehicles – have demonstrated to be ready to jump into the market.

The Commission wants to achieve leadership in renewable energies. This cannot be reached by limiting renewables. It should limit and phase out fossil sources.

About the proposal’s process:

The European Commission has brought a new proposal to the table how to support Renewable Energy in the period from 2021 to 2030. This so-called Second Renewable Energy Directive or RED-II increases the targets towards 2030 on carbon emission reduction (40% lower than 1990-level) and on the share of renewable energy in the final energy use (27%). For energy efficiency improvements the commission first awaits further progress before setting a target.

This proposal is currently being reviewed and amended by various Committees of the European Parliament.