Although December 2016 shows another record-high for electric vehicles in the Netherlands, also other low-carbon options are urgently needed to further reduce transport emissions.

31,6%, in December 2016, has been the highest share for full electric (FEV) and plug-in hybrid electric (PHEV) passengers vehicles in the monthly new car registrations in the Netherlands so far. The previous record was set in December 2015 (24,6% share for EVs). December 2016 showed another important milestone: total EVs registrations has topped over the 100 thousand, since their introduction around 2012. Yet, the EV market uptake in 2016 slowed down and was 36% less than in 2015, mainly due to a sobered fiscal support scheme for PHEVs.

END_OF_DOCUMENT_TOKEN_TO_BE_REPLACED

Europe-based feedstocks for biofuels have gained dominancy in the last couple of years official reporting in the Netherlands and Germany shows.  Also the greenhouse gas (GHG) savings established by the use of biofuels in these two countries have increased.

Europe is currenlty debating  the pathways to a decarbonized, resource efficient  and energy independent Europe. The numbers in this graph demonstrate how biofuel GHG-savings and feedstock origin are contributing to these objectives. 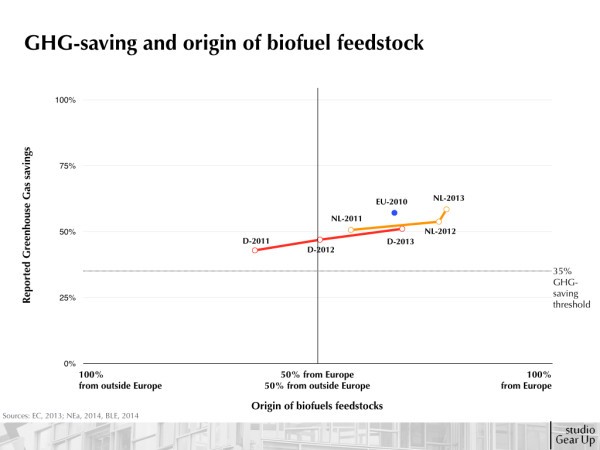 Plotting the 2010 performance of the entire EU* causes some confusion. Both the GHG-saving and feedstock origin 2010 figures for the EU are higher than one would expect from the Dutch and German performances over 2011 till 2013 . Are other countries achieving higher GHG-saving levels and significantly using more European feedstocks? A more detailed analysis of the performances of other member states will be needed to clarify.