Although December 2016 showed another record-high for electric vehicles in the Netherlands, also other low-carbon options are urgently needed to further reduce transport emissions.

31,6%, in December 2016, was the highest share for full electric (FEV) and plug-in hybrid electric (PHEV) passengers vehicles in the monthly new car registrations in the Netherlands until then. The previous record was set in December 2015 (24,6% share for EVs). December 2016 showed another important milestone: total EVs registrations has topped over the 100 thousand, since their introduction around 2012. Yet, the EV market uptake in 2016 slowed down and was 36% less than in 2015, mainly due to a sobered fiscal support scheme for PHEVs.

Policymakers see EVs as a key tool to decarbonise the Dutch transport sector. By 2050 the sector should bring down the carbon emissions 60% under the 1990 levels. From 2035 onwards all new-sold passenger cars should be zero-emission capable.

However, the introduction of EVs can be characterized as an early stage market adoption. While the market uptake of more than 112 thousand EVs in half a decade is impressive, EVs still have a limited impact on decarbonizing transport, especially because about 90% of the EV-fleet are plug-in hybrids, for which it is not monitored how often they are driving electrically or fuel-based. The total Dutch passenger car fleet numbered 7,5 million in 2009, increasing with 0,7 million to 8,2 million in 2016. The share of EV’s in the 2016 fleet is thus 1,4%, as the large majority of new registrations is still non-EV’s.

In a September 2016 publication (Tijdperk elektrische auto nadert – Era electric vehicles is approaching) ING Economic Research estimates that by 2020 EVs could reach 10% of total registrations, progressing to a 25% share by 2025. Notwithstanding how promising the prospect on a transition to an electric mobility era is, for reducing carbon emissions of the Dutch transport sector more actions are urgently needed.

Extrapolating the scenario as sketched by ING to 2030 and further, the car fleet will only see a 12% market share of EVs by 2030. The majority of passenger cars will then still operate on basis of fuels. In that scenario, the share of EVs would surpass the share of fuel-based vehicles around 2038. It is therefore evident that in the next twenty years, the passenger car fleet will be dominated by fuel-based vehicles. Therefore, policy must address the options to develop low-carbon fuels for these vehicles.

[addition on 2019-aug-02: A scenario like is unfolding in the Netherlands, aiming at 100% sales of EV-only, and a gradual increasing share of EV in sales towards 2030 also indicates that  ICE-vehicles will exist for years in the total passenger car fleet, as is shown in the graph below, looking towards 2040.] 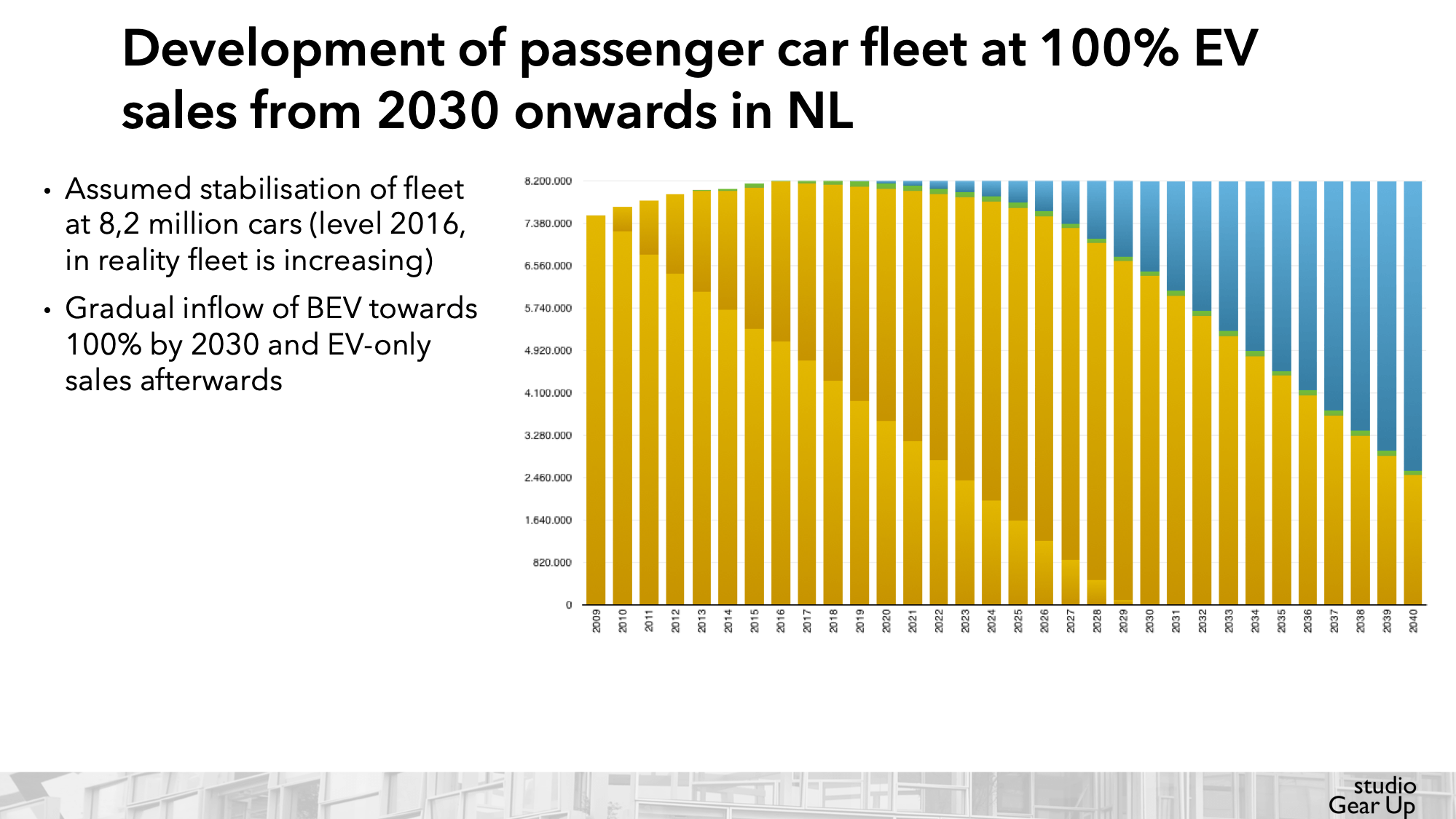 In a passenger car fleet that keeps being dominated by fuel-based vehicles, there is an urgent need to develop and introduce low-carbon fuels that fit in the existing and near future vehicles and infrastructure. Options are needed for low carbon fuels in the existing car fleet in order to decrease the carbon footprint of transport.

Currently sustainable biofuels are blended into conventional gasoline and diesel at approx. 7% (on energy basis) levels. According to the monitoring of the Netherlands Emission Authorities these fuels, in majority waste based biofuels, delivered in 2015 already an average of 72% Well-to-Wheel greenhouse gas emission reduction -and in absolute terms a nearly 1,3 million ton CO2-reduction (Based on NEa, 2016). Introducing higher blends will immediately result in decreased carbon emissions. Moreover, developments in combustion engines to improve combustion behaviour and efficiency are ongoing, also in the Netherlands. The Combustion Technology Group at the Eindhoven University of Technology is researching an engine with practically no emissions.

The further development of advanced biofuels will increase options for  decarbonisation in existing vehicles. Furthermore, also a new and broader category of fuels – renewable fuels, or Power-to-X fuels – gaines more and more attention. For instance, in Iceland renewable methanol is produced, by converting renewable electricity, with CO2 as a carrier, into methanol. This liquid fuel can be easily stored, distributed and blended as a renewable component. Canada-based Enerkem converts municipal solid waste to produce biomethanol and -ethanol. Audi is exploring the production of e-gas from renewable energy, to be used as CNG-fuel in its g-tron models. In the Netherlands biogas from sewage sludge processing plants is converted to compressed green gas.

While the market development of electric mobility is gearing up, the opportunities to decarbonise current and near-future-lasting passenger car fleet needs urgent action. To start with: open up the market for higher blends of low-carbon fuels, develop innovation mechanisms to speed up production of advanced biofuels and other renewable fuels, establish fiscal support schemes that provide advantages to low carbon fuels over fossil fuels.