Tuesday, March 31, Mrs. Hendricks, the German Minister of Environment, pointed out that after three years of increasing CO2 emissions in Germany, “the trend finally points into the right direction”. Germany saw 4,3% lower CO2 emissions in 2014. It is a start, but a lot has to be done to further decarbonize Germans energy consumption to reach its 2020 energy targets.

Germany presented an ambitious Action Plan to give yet another fierce impulse to the decarbonization of Germany’s energy consumption in december 2014. 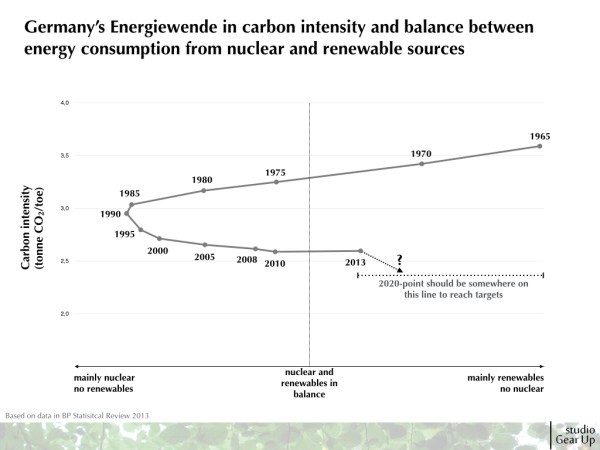 Though the ‘Energiewende’ is progressing (see graph), the ambition is challenging, in two ways. Firstly, by 2020 the total CO2-emissions must be 40% less than they were in 1990. Secondly, the total energy consumption must be 20% lower than it was in 2008. However, as the graph shows the downward trend to decarbonize Germany’s energy consumption has flattened. Even though the use of renewable energy has grown dramatically. Obviously decreasing the use of coal will help. But also an ‘Energiewende 2.0’ in oil consumption is urgently needed. 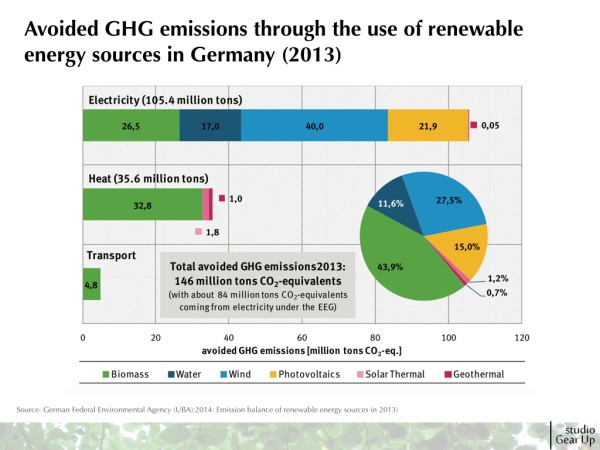 The Federal Environmental Agency (BMU) provided an overview of the avoided greenhouse gas emissions through the use of renewable energy sources. Not much to a surprise most avoidance is achieved in the electricity sector, at distance followed by the heating sector, and with only a minor share for the transport sector (see graph). The strong focus on renewables in electricity has paid of, whereas a low share (approx. 5%) of biofuels in transport can only show a modest contribution to the avoidance of CO2 emissions.

Considering the energy consumption development of Germany of the last 50 years several trends become visible. In the mid 60s Germany was fueled by coal (two third) and oil (one third). From that point on the total energy consumption grew and at its peak in 1979 was 45% higher. Natural gas had reached a 15% share. Oil grew by 50% (due a strong increase in mobility). And coal, though stable in volume,  declined to a lower than 40% share. By 1990, consumption went down slightly. Natural gas had strengthened its position, the share of nuclear was at its highest point, coal and oil jointly had a share of nearly three quarters. By 2013 the total energy consumption has decreased slightly to the 1990 figures – renewables have overgrown nuclear, natural gas reached a 20% share, now equalling coal (which in the last years was on a rise due to US shale gas activities), while the share of oil has been left unchanged with a 35% to 40% share. 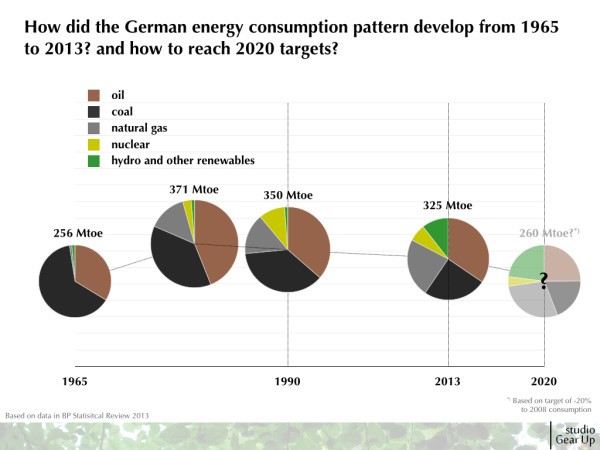 To reach the minus 20% energy consumption target in fact the total amount of energy consumed should be back to the level it was at in the mid 60s: around 260 Mtoe. In 2013 the consumption is still 25% above that level.

‘Energiewende 2.0’ in oil consumption is inevitable

Germany is addressing the complicated issue to further bring down the carbon intensity of the energy consumption mix. In this respect, how quickly will energy efficiency measures be able to bend the trend downwards? And of which energy sources will the 2020 energy consumption be composed of? It is clear from the German plans that coal is under pressure, that gas and renewables must grow further. However reducing oil consumption for transport seems to be a blind spot. Also in the European Energy Union plans the transport sector does not look to be at the center of Brussels’ focus. An ‘Energiewende 2.0’ in oil consumption is inevitable to move further forward to a decarbonized energy consumption.