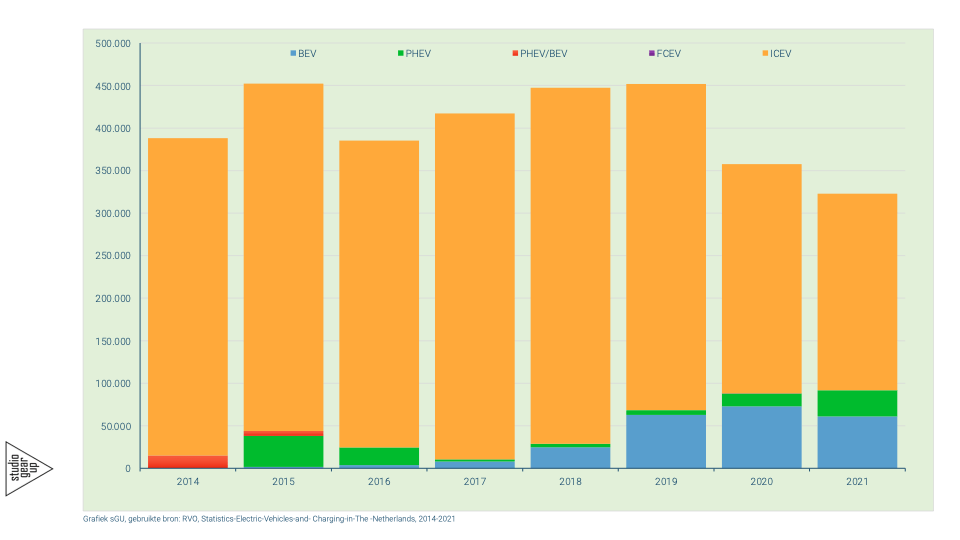 Analysis of car sales in 2021 in the Netherlands: lower sales of ICEVS ánd BEVs

After years of growth of the annual new registrations of passengers cars, 2021 was characterized by a strong decrease of total registrations. For the first time the number of registered Battery Electric Vehicles (BEVs) was lower than the previous year, breaking with a trend of steep increases.

2021 saw a drop to 320 thousand vehicles in total sales. The sale of BEVs fell from 71 thousand in 2020 to 61 thousand, thus breaking with the growth trend in the years before. A surprise was the growth of registrations of Plug-in Hybrid EVs (PHEVs). In 2016 and 2017 this type of EV was strongly supported with fiscal measures, but from 2019 onwards they have gained market share without any substantial fiscal support. In 2021 the registrations more than doubled to 31 thousand.

Which strategies were followed by car manufacturers?

In the past years car manufacturers followed different strategies for the introduction of EV models to the market. New companies entered the market scene, like Tesla and Polestar, that offered only electric models. Some of existing car manufacturers decided to bring separate EV-models and ICEV-models, in the case of VW the ID3 was introduced as new EV model, while in the ICEV range models like Polo and Tiguan are kept in portfolio as well. Other manufacturers have the strategy to bring many of their models in three modi: either as BEV, ICEV or Hybrid, allowing their customers to stick to their favourite model, also when switching to (partially) electric driving. Do these strategies lead to different perspectives? For that we look first to the top 10 of registered vehicles.

Figure 2 shows that the most registered car model in 2021 is the Kia Niro, with in total nearly 11 thousand registrations (combination of both BEV and ICEV registrations). The best sold BEV is the Skoda Enyaq (either 60 or 80 kWh battery pack) with nearly 7 thousand registrations. Like in previous years is the overal best selling ICEV model the VW Polo. Figure 2 makes clear that in the top ten of new registered passenger cars: 5 models are offered in either BEV or ICEV version. Only one model in the top ten is a BEV-only model (Skoda Enya). And three models in the top ten are only available in ICEV-modus only.

Figure 3 shows the line-up of all registered vehicles for the last four years, ranked on basis of the base sales price of each model (Y-axis).

From the graph it can be seen that the total sales of 320 thousand vehicles is much lower than in previous years. It also shows that on average, the base sales prices for vehicles are higher than in the years before. As an example in the line-up for 2021 the vehicle at the 50 thousandst spot is higher in price than in the previous years. This might be a signal that either the prices move upwards, or that customers used to buy smaller and cheaper vehicles are stepping out of the new registration market. Figure 4 actually shows that the average registration prices over the years have gone up, while the totale registrations go down.

The following graph (Figure 5) actually further details out this trend of decreasing registrations of lower cost vehicles. The graph shows the number of registered vehicles for the years 2018-2021, per base sales price group (10-20k€, 20-30k€ etc). The lowest price groups see remarkable reductions in registration volumes. It can also be observed that in the price groups 30-40 k€, 40-50k€, 50-60k€ and 60-70k€ the number of registrations actually have gone up in te past years. One argument that is mentioned by experts is that under the experienced shortages of computer chips car manufacturers decided to deploy the scarce chips in their high end models.

Figure 6 shows that most registered BEVs are in the price group of 30-40 k€, like was the case in 2019, though this year at lower volumes. In 2018 and 2019 the largest volume of registered BEVs was at much higher price groups, so the trend towards more modest prices groups is clearly seen.

Some conclusions from the 2021 sales of passenger vehicles

First, the number of new vehicles registrations has gone down in absolute terms. This may have an effect on the renewal rate and average age of the passenger car fleet: The rate will probably slow down and the average age will increase.

Second, 2021 showed a the lower registration number of BEVs compared to 2020, causing a possible slowing down of the market scale up of BEVs as well, when this trend will continue in the next years.

Third, BEVs are dominant in the higher price groups of car sales. The share of BEV registrations in the below 30 k€ groups is still very small. This will probably impact the future second hand offerings, in the sense that that market can only, for some time to come, most likely offer high-end vehicles to customers. Whereas those customers most likely from available car purchase budgets would prefer lower cost and lower type class BEVs.

To summarize: the results from the past four years might signal car manufacturers to develop a BEV portfolio that sells not only as a new model, but will be appealing also for a future second hand market. That could boost the further growth of the BEVs in the total passenger car fleet in The Netherlands.

Analysis of car sales in 2020 in the Netherlands: sales of small and cheap cars are under pressure

2019 is a disruptive year in Dutch new sar sales

The information in this article is based on public information and data collected from BOVAG, RDW, RVO, Autoweek.nl/verkoopcijfers, www.iserv.nl/files/electric.